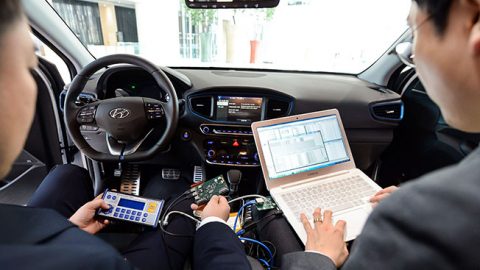 Carmaker Hyundai plans to test its self-driving car at Willow Run, a test site being developed near Detroit, Michigan. The site will be ready in 2017 and companies can pay per time they use the facility. For Hyundai, this move is a step forward on its roadmap for connected car development.

Hyundai Motor Group will collaborate with leading global IT and networking companies to develop its ‘Hyper-connected and Intelligent Car’ concept, with research and development focused on bringing new values and efficiencies to the lives of customers.

The roadmap outlines four main service fields that will help develop smarter, more intelligent cars that can receive and utilize data faster than ever before. The mid- to long- term development focus includes a range of key features, including: smart remote maintenance services, autonomous driving, Smart Traffic and a connected Mobility Hub that provides security and data management for all elements of the connected car.

Willow Run as an industrial location is not new. It was built in the early part of World War II by the Ford Motor Company for the production of war munitions. At first the factory made components for bomber planes but later on  switched to full production of mainly B24 Liberators. General Motors bought the plant in 1953 and operated Willow Run Transmission there until 2010, when it was closed because of GM’s bankruptcy. A small part of the property was redeveloped as the Yankee Air Museum, while the rest is being redeveloped as a research and test facility for connected cars.

The facility itself is not the only reason for the Korean carmaker to want to test at Willow Run. There is also the advantage of paying per use of the test site, rather than being stuck to a certain fee. It will complement Hyundai’s own proving ground in California because Detroit is closer to the company’s main tech centre. Additionally, Michigan has looser than average regulations for testing autonomous cars on public roads, which enhances the possibilities for doing so.