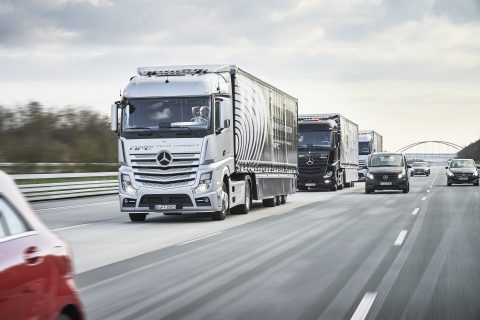 Autonomous and connected trucks in a convoy from Stuttgart to Rotterdam

Three connected and autonomous Mercedes-Benz trucks are making a cross-border convoy drive from Stuttgart to Rotterdam. Daimler Trucks is actively supporting the European Truck Platooning Challenge 2016, initiated by the Dutch government as part of its EU-Council Presidency. Dr. Wolfgang Bernhard, on the Board at Daimler and responsible for Daimler Trucks & Daimler Buses, personally waved the drivers off on their two-day trip from their departure point at the Mercedes-Benz museum.

Daimler Trucks is the only manufacturer of autonomous trucks with official road approval worldwide and participates jointly with five other European commercial vehicle manufacturers in the rally. The scheduled arrival at the port of Rotterdam is April 6th. The tour of the three Mercedes-Benz trucks goes from Stuttgart over Heilbronn (A81) on the A61 and A67 highways, across the federal states of Baden-Württemberg, Rheineland-Palatinate and North Rhine-Westphalia, and towards Venlo to cross the border into the Netherlands.

With the European Truck Platooning Challenge, the European commercial vehicles manufacturer and the Dutch government aim to jointly address the potential for truck platooning and the need for harmonized, trans-border regulations, with the aim of facilitating efficient road transport throughout the EU.

Harmonized, cross border regulation is an essential prerequisite for efficient road transport in the future.
“With our autonomous and connected trucks, we are pleased to participate in the European Truck Platooning Challenge initiated by the Netherlands. I wish our drivers a good and successful trip on their way to Rotterdam. We consider platooning to be a meaningful part of the integrated approach in which all stakeholders in road transport need to contribute in order to reduce fuel consumption and CO2”, said Dr. Wolfgang Bernhard, at the departure of the three trucks in Stuttgart.

“Driving in a convoy is one of numerous examples of raising the performance of goods transport extensively with connected trucks. Today already 365 000 commercial Daimler vehicles are connected. Consequently, we are pushing this development”, Bernhard continued.

The worldwide transport of goods is a prerequisite for economic growth. Transporting more goods in the future will require innovative solutions like truck platooning. Daimler’s smart trucks have the potential to make the transportation of goods substantially more efficient, more sustainable and safer in the coming years.

The key to this is the connection of the truck with other vehicles and further logistics participants. About two weeks after the world premiere of its Highway Pilot Connect system on the A52 highway near Düsseldorf, Daimler Trucks again demonstrated its leadership in technology on the field of connected vehicles with its participation in the European Truck Platooning Challenge 2016.

Highway Pilot Connect is an advancement of Highway Pilot, the only worldwide system for the automated driving of heavy trucks. This time, on the way to Rotterdam, Daimler Trucks demonstrated the advantages of electronic vehicle-to-vehicle (V2V) cross border networking. This technology allows electronic docking by vehicles on motorways and long-distance highways, also known as platooning.

Connected vehicles in a platoon require a distance of only 15 instead of 50 metres between them. This considerably smaller distance produces a significant reduction in aerodynamic drag – comparable to slipstream riding in cycling competitions. In this way, a platoon of three trucks can achieve a fuel saving of up to ten percent, reducing CO2 emissions in the same measure.

Simultaneously, platooning allows much more efficient use of the road space: thanks to the shorter distance between vehicles, a platoon of three linked trucks has a length of only 80 metres. In contrast to this, three trucks which are not electronically docked require a total of 150 metres of road space. At the same, time platooning makes road traffic much safer: while a human behind the wheel has a reaction time of 1.4 seconds, Highway Pilot Connect transmits braking signals to the vehicles behind in less than 0.1 seconds.

This considerably reduced reaction time can make a major contribution towards reducing rear-end collisions such as those which occur when encountering traffic jams on motorways. Despite all of the technological possibilities offered by the connected vehicle, the driver always bears the responsibility for the control of all assistance systems.

As an element of the so-called integrated approach, connected driving in the form of a truck-platoon can enable all stakeholders in road transport to jointly contribute to the European Union’s goal of saving CO2 (30 percent down by 2030 compared to 2005): commercial vehicle manufacturers, body builders, the tire industry, the logistics enterprises and finally the political stakeholders. The overall objective of the integrated approach is to optimize the holistic system of road transport.