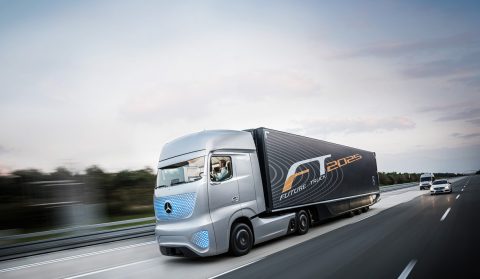 UK plans to trial self-driving trucks on roads in 2016

Self-driving trucks are going to be tested on UK roads this year. It is expected that chancellor George Osborne will confirm this in his Budget speech this month. The Department for Transport wants the UK to pioneer in testing driverless ‘HGV platoons’.

Platooning means vehicles move in a group. In this way they use less fuel and save room on the highway because there are only a few meters between the trucks. The Times reports trials would take place on the M6 in Cumbria later in 2016, with vehicles in convoy headed by a driver in the leading lorry.

The tests will take place on a quiet stretch of the motorway. The plans could result in the platooning of up to 10 computer-controlled trucks driven in convoy. It was said that the UK wants to fund the trials as a part of plans to speed up lorry deliveries and decrease congestion on the roads in the United Kingdom.

Edmund King, president of the AA (Automobile Association), doubted whether this kind of scheme would work in the UK as it does in other countries as the UK motorway network has an enormous amount of entrances and exits: many more than other motorways in Europe and around the world. This might cause problems for other vehicles needing to get past the 44 tonne 10-lorry platoon to enter or exit the road.

A Department for Transport spokesman said: “New technology has the potential to bring major improvements to journeys, and the UK is in a unique position to lead the way for the testing of connected and driverless vehicles.”

King said the “only feasible place” to trial these plans would be the M6, a route which tends to have less traffic and which has slightly fewer entrances and exits. A similar lorry developed by Daimler was already tested on a public road in Germany in October.

A highway pilot inside the vehicles helps them avoid other road users through a radar and camera system. This system can be activated by the press of a button. However, the company still requires a human driver to be present and focused on the road at all times.