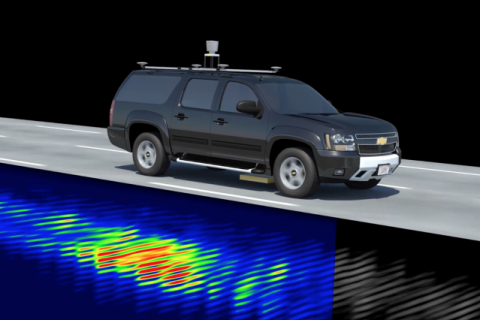 MIT researchers have developed a technique for recovering visual information from light that has scattered because of interactions with the environment — such as passing through human tissue. The technique could lead to to computer vision systems that work in fog or drizzle. The development of such vision systems has been a major obstacle to self-driving cars.

In experiments, the researchers fired a laser beam through a ‘mask’, a thick sheet of plastic with slits cut through it in a certain configuration, such as the letter A. Subsequently, the beam was fired through a 1.5 centimeter tissue phantom: a slab of material designed to mimic the optical properties of human tissue for purposes of calibrating imaging systems. Light scattered by the tissue phantom was then collected by a high-speed camera, which could measure the light’s time of arrival. From that information, the researchers’ algorithms were able to reconstruct an accurate image of the pattern cut into the mask.

The new technique has major potential for medical applications, but its possibilities in automotive sensing may be even more compelling than those in medical imaging. Many experimental algorithms for guiding autonomous vehicles are highly reliable under good illumination, but they fall apart completely in fog or drizzle. Computer vision systems misinterpret the scattered light as having reflected off of objects that don’t exist. The new technique could address that problem.