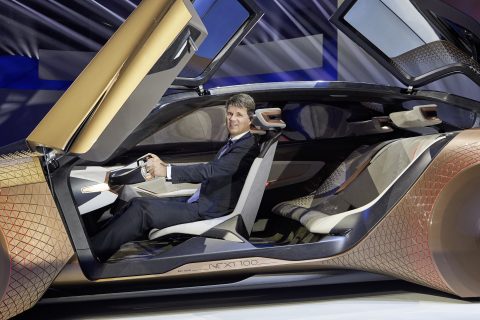 BMW: majority of cars completely self-driving in near future

At the moment, the world is on the verge of realizing automated driving; in the not-too-distant future, the majority of cars will probably be completely self-driving and will travel the streets of cities inhabited by far more people than today. Therefore, BMW is shifting gears towards self-driving mobility. This was stated by Harald Krüger, Chairman of the Board of Management of BMW AG, at the Centenary Event in Munich.

With the announcement of the BMW Vision Next 100, it looks like the world leader in luxury cars is shifting its central vision towards exploiting automated driving in the near future.

A series of technical challenges need to be solved with automated driving, BMW says. “But this is also a major opportunity for revolutionizing mobility.” The new BMW was announced during celebrations for the automobile company’s 100th anniversary. This is a new, self-driving vehicle which is due to be produced in the future.

“A vehicle that will allow drivers to select when they want to control the wheel and when they want to do something else, with assistant systems that can warn of bicycles, pedestrians or other road obstacles. BMW drivers will be able to let their cars do the work – but only when the driver wants,”  Krüger said.

The concept car hints at a new strategy for BMW, which will be announced later this month. The last major strategic shift occurred in 2007, when former CEO Norbert Reithofer pushed the company towards investing billions for the reduction of fuel consumption and the production of the first electric vehicle.

The focus on self-driving mobility comes with the high expectations the chairman has for the near future. “In the not-too-distant future, people will get around in robots on wheels,” he said. “How will we justify the existence of vehicles by BMW, a brand for whom the individual and sheer driving pleasure are the focus of everything?”