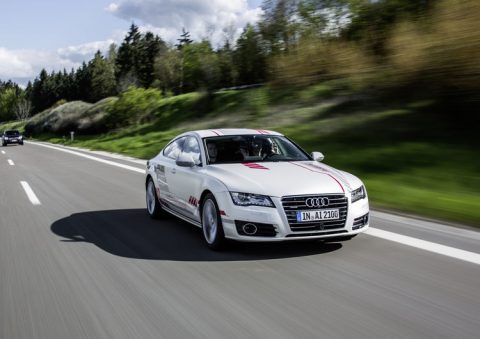 Next level self driving Audi in 2018

Audi of America-president Scott Keogh believes his company is at the forefront of developing self-driving cars. Audi has been working on autonomous driving technology for the last ten years. Its latest research car A7, nicknamed Jack, is showing serious potential. It can autonomously perform all driving maneuvers while considering other users of the road. And a next level self-driving Audi is set to be launched in 2018.

Keogh stated to believe Audi is leading the way in the development of autonomous driving cars on CNBC’s Power Lunch. “When you think about it, the issue is not driving around your driveway, or driving around your neighborhood, it;s when you’re stuck in tedious traffic…that’s where this is coming to life.” Keogh also pointed out that the next self-driving Audi is set to be launched in 2018. Where Jack is a level 2 autonomous car, the A8 will be a level 3.

What sets Jack apart from many other self-driving cars is its appearance. “Jack is programmed to work on freeways in automated mode. It doesn’t have all the antennas, cables and sensors sticking out. It looks just like a car that you can go buy at the dealership today”, said Audi Senior Engineer Kaushik Raghu. In addition to that, the car has learned to take other users of the road into consideration.

Through the research project, the Audi A7 is continually improved. That process has made the car drive more naturally. For example, it confidently deals with hazardous points on the road. If a lane change is intended, Jack signals and moves closer to the lane marking before actually switching – just as human beings tend to do. When other vehicles on the expressway merge into the A7’s lane. jack decides whether to brake or accelerate in order to solve the situation as harmoniously as possible.