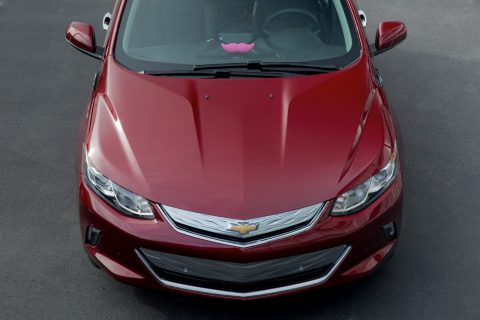 General Motors (GM) finds both self-driving vehicles and ridesharing interesting concepts, and according to GM’s president the combination of those two shows the most potential. Dan Ammann thinks that autonomous technology will lead to beter safety on the roads, and that the timeline for self-driving vehicles is “probably faster than what you think.”

Ammann made these and other statements during the Fortune Brainstorm Tech conference in Aspen, Colorado. GM invested half a billion dollars in ridesharing startup Lyft last January. This taxi-app offers its users rides in cars of other people. The 500 million dollar investment is meant to help Lyft’s network expand. At the time of the investment the service was available in 190 American cities. Lyft and GM want to create a network of self-driving cars. For Lyft, self-driving technology is key to changing the model of car ownership.

In March, GM invested in another startup: Cruise Automation, a company that specializes in automated driving technology. This step was taken to further accelerate GM’s development of autonomous vehicle technology. At this moment Cruise is testing it’s technology on GM’s soon to be laucnhed and fully electric Chevrolet Bolt EV. This vehicle will also become available to Lyft drivers. GM and Lyft announced that their car rental parnership wil expand to several more cities in the US and abroad. “The alliance has been significantly more successful than we even envisioned”, said Ammann.

In the recent past, GM’s CEO Mary Barra has stated that her company believes in semi-autonomy rather than full autonomy, where the cars have no steering wheels or brake pedals. President Dan Ammann sees self-driving cars becoming a reality as a result of a series of developments. In Aspen, Ammann could not name a specific timeline. “There isn’t going to be a particular moment or day when we see it. It will unfold in a gradual way, but it will be a lot faster than people are expecting.”