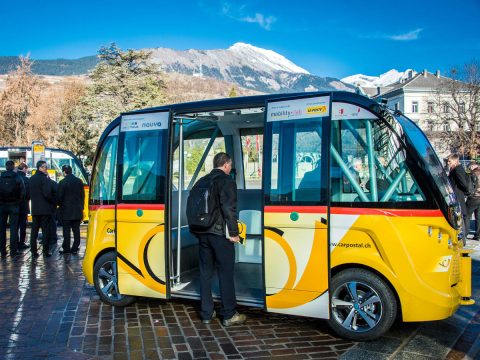 Approval for self-driving shuttles in Switzerland

Residents and visitors can now travel in the Swiss city Sion with the PostBus self-driving shuttles. The authorities have granted approval for the pilot project in a specified area of the city. Self-driving buses carrying passengers on the roads in public areas are a first in Switzerland.

The fully electric vehicles were presented to the public for the first time last December. In the last months, they have been tested on private land. The authorities have now given the green light for the testing of this type of passenger transport in the center of the Valais capital.

The statutory regulations for the use of autonomous vehicles on public roads have not yet been finalized. As a result, special permits are required so that the pilot project can be implemented in the city of Sion. Both the Federal Roads Office (FEDRO) and the road traffic department of the canton of Valais have granted approval to PostBus.

The tests will run until October 2017. The companies and institutions have examined the technical and legal aspects relating to road traffic and passenger transport. To meet the requirements, the two autonomous vehicles have been further developed.

They now have air conditioning, and feature permanent ventilation and windscreen wipers for optimum visibility through the windshield. A second battery with an output of 16.5 kW ensures greater autonomy of the vehicles, and thanks to a ramp, people with limited mobility can also use the shuttles. The autonomous vehicles have 11 seats and travel at a maximum speed of 20 kilometers per hour.

PostBus is responsible for the operation, safety and maintenance of the two autonomous shuttles, and has appointed specialized staff to fulfill these various tasks. Under the direction of an operations manager, a teleoperator uses a special fleet management system for the use and operation of the shuttles.

If necessary, the teleoperator can stop the vehicles immediately on site or from a distance. He also trains the safety drivers who are on board for every journey the autonomous shuttles make. The safety drivers are responsible for monitoring operations, ensuring that the shuttles are in perfect working order, and the safety of passengers.

They can apply the emergency brakes by pressing one of the two emergency buttons installed in the vehicle. The safety drivers also provide passengers with information and assist them with getting on and off, for example with wheelchairs.

Use of the autonomous shuttles is free of charge and the service offers passengers a flexible timetable. In the first phase, the service will run every afternoon from Tuesday to Sunday. There are several factors that determine whether the vehicles can operate: the weather forecast, the condition of the roads, and events and planned roadworks along the route.

PostBus, the city of Sion and the canton of Valais want to test new forms of mobility. The EPFL for example is using the project for its academic research. During the project, HES-SO Valais-Wallis plans to examine the acceptance of this new technology among the population. There is also the question of whether it is possible to use autonomous vehicles in public areas – for example in pedestrian and car-free zones – or on company premises.