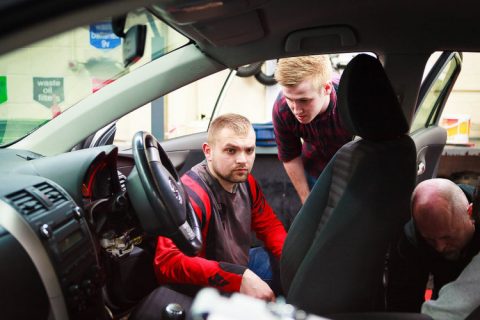 A team of eight students from the Applied Robotics Lab at Waterford Institute of Technology in Ireland succeeded to built a self-driving vehicle in just 12 weeks. The team adjusted a Toyota Corolla which navigated its way around the campus of the technical college.

“Achieving the ‘White Board to Self-Drive Car’ project in 12 weeks, eight WIT Electronic Engineering students have proven that anything is possible, if you keep moving forward. They have just completed a project never before attempted within WIT, in 12 weeks and it worked. One of the coolest sounds we have ever heard on a project was listening to the car increasing revs as its gets ready to go,” said lecturer Jason Berry, the Lead Engineer in WIT’s Applied Robotics Lab (ARL).

See the video of the test here: